Welcome to the worlds largest database on European car interiors!

European cast skin production started around 1980 and was used for upper-class interior skins. The process used was rotomoulding of soft vinyl powders, which is still today the predominant technology used. In the 90'ies, despite high skin cost, the technology conquered some high-volume models in the D and C car segment, and today it is used in some B class models, like VW Polo and Seat Ibiza.

Since 1993, the rise of the vinyl cast skin is challenged by PUR spray skins, first introduced in the market via the Opel Omega instrument panel and door panels. Aggressive pricing and design freedom have led to a wide market penetration, with more than 2 million IP skins supplied (12%) in end of 2003.

In 1999, thermoplastic PUR powder (TPU) for rotomoulding had a European first on the Jaguar S-Type IP skin. High powder price limits the current number of TPU projects to a handful of niche cars, like Audi Cabrio and BMW 5 series.

PUR skins produced by RIM technology had been known for 10 years, mainly in small parts, like center armrest covers, or glove-box covers. In 2003, they make their debut as large inserts in the BMW 6 series IP skin and as a 2- tone door panel coverstock for a Mercedes car. Potential for a near-future application in IP skins is quite high.

This market survey shows a strong increase in cast IP skins between 1990 and 2003, reaching 50% of production of European cars. This is a 44% increase from 1990 level, and a 5% per year increase over the last 5 years. Until 2007, we expect a slow-down of this increase by a further rise of 2% per year, mainly in PUR skins. 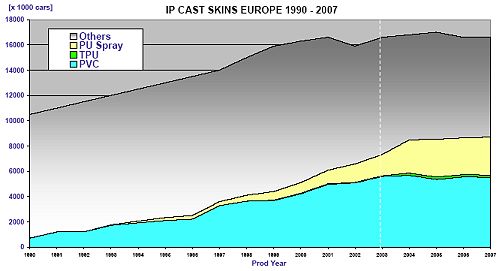 Navigation unten:
Sitemap | imprint & contact | About SelfBase® | Data Protection
© SelfBase 2003-2021
Currently the models are available free of charge until about the year of construction 2010. An update is currently not planned.